UPDATE: Our worship service will be in the evening this Sunday! 6:30pm. For more information go here: www.dcbc.org/latest

January 22, 2020 Pastor: Dustin Rudolph Series: Can I Trust the Bible?

We did not get this session recorded but here are my lecture notes.  Pardon the mess, they are notes after all. Use them as you wish but don't give me credit for the material!  The vast majority of this lecture was drawn from the following sources:

"The Canon of Scripture" by FF Bruce (Intervarsity Press)

Going Back in Time

Deconstructivism is this idea in philosophy that says all of the beliefs we have become unstable when we look back at what they’re really founded on.  In fact it is deconstructivist thought that has sought to undermine scripture. I want to show you that their claim is false.  In fact, we can use their own analytical tools to show that the foundations of what we have are strong and reasonable- and not arbitrary.

Here’s where we start:

What is our first source for understanding what is and is not “Canon”?

-what we were taught by Christians before us.    (kids to parents to pastors to their pastors, professors, to their professors and so forth to publishers).  Everyone gets it from somebody before them.

-there’s also the idea that the canon authenticates itself but we’ll get to that.  Externally, if you were a sociologist from a group of people who had never heard of the Bible and you were dropped in to our church and began to study why we have this book, that’s where you’d start.

Now if we go back far enough we’re going to run into a set of stairs that we’ve got to go down to get to the next level, closer to the foundation.

And here’s our first set of stairs:

The Protestant Reformation:  In general, we could say this:

In the 16th century, the reformers found such an issue with corruption within the doctrines and practices of the church that they said “we must go back to scripture as our authority.”

But then they ran into a problem- “Which Scriptures?”

Roman Catholics – included in their generally accepted scriptures were books such as:

The Wisdom of Solomon

The Letter of Jeremiah

The Prayer of Manasseh

These are known as the apocryphal books (hidden writings) or deuterocanonical books (second canon).  And it is these books where some of the distinctively roman doctrines were coming out of.

46 It is therefore a holy and wholesome thought to pray for the dead, that they may be loosed from sins.

Now what Roman Catholic doctrine causing problems in the early 1500’s might be based on a verse like that?

Now why they are called apocryphal we’ll get to in a minute, why would anyone describe these books as “hidden”?

Reformers- should those books be recognized as scriptures?  After all, Jerome, one of the first translators of the Bible into Latin, did not include the Apocryphal books as canon because they were not in the Hebrew Bible (only the Septuagint).  So the reformers argued, “we want to use the OT that Jesus used!”

[Recognize also that at this time you have a general cultural move towards celebrating antiquity.  This is typically known as the renaissance time period but also the time in which humanism was on the rise.  So looking back into history, studying old languages, old civilizations was academically fashionable.

RC – it doesn’t matter what you recognize or don’t recognize as scripture, it matters what the Church says and we say these are scriptures.

Council of Trent – 1546 –  “if any one receive not, as sacred and canonical, the said books entire with all their parts, as they have been used to be read in the Catholic Church, and as they are contained in the old Latin vulgate edition; and knowingly and deliberately contemn the traditions aforesaid; let him be anathema.”

Now what is the Old Latin Vulgate edition of the Bible? The Romans seem pretty insistent that it’s authoritative so what is it?

And at the same time, the Reformers are looking back to tradition as well.  Which tradition?

Well as it turns out this comes down to a man named Jerome.

We’re going now down to the next floor in the house and this is Jerome’s floor.

Who is Jerome and what was he up to?

Eusebius Sofronius Hieronymus, also known as Jerome, was born in 346 AD in Stridon, Dalmatia.  All we know about this place is that it was a roman province probably near the northeast corner of the Adriatic sea.  Either modern day Croatia or Slovenia.

The reason we don’t know where this city is anymore is because in 378, when Jerome was 32, and this is his own report… at that time the Arian Goths came from the north, from over the Alps and they overthrew his little town.

Either way, Jerome wasn’t there when it happened.  He left home in his teens to study in Rome and then from there went to Antioch where he later studied under an ethnically Jewish Christian who taught him Hebrew.

Anybody know where Antioch is?  It’s in modern day Syria.  Now if you wanted to study ancient Hebrew or Greek or anything having to do with Christianity… would you go to Syria to do that?

Syria is now majority Muslim.  Well it wasn’t in 380.  In fact Muhammed won’t be born for another 200 years.  Ancient Antioch, as it was when Paul was born again and called to Christ, was very central to Christianity.  So it was here that Jerome got a lot of his training.

Pope Damasus commissioned Jerome, because of his expertise in biblical language, to revise the latin bible so that the western church would have a more usable text.  What they had at the time was, according to Jerome “unsatisfactory” and in some cases poorly translated.

He started with the Gospels and then did the Psalms.  In his first go at the Psalms, Jerome used what was available to him, the older versions of the Septuagint (the Old Testament in Greek) and a Greek translation known as the Aquila translation which was written in the 2nd century AD.

And as he did that he found that there were books that were in the Septuagint that were not to be found in the Hebrew sources.  And there were some that he could find in Hebrew but they did not seem to be originally Hebrew books.

And this is a quote from Jerome “Whatever falls outside these 24 books must be set apart among the apocrypha.”

And yet, Jerome included the following books in his translation work:

Tobit and Judith (from Aramaic)

Keeping them separate from the Canonical books and including a note that these are for edification but “are not for establishing authority of ecclesiastical dogmas”.  You get the sense that Jerome noticed something different about these books.  Not just from meeting with Jews and getting their understanding of their own books (written 300  BC to 30 BC) but also from reading them, translating them, studying them and seeing how they simply don’t fit in the redemptive historical narrative.

As the reformers would say, they are not self-authenticating.  You’ll find doctrinal contradictions, some fanciful just strange stories, and generally an inconsistency with the rest of scripture.

Ecclesiasticus says that it was because of Eve’s sin that we all die.  But Romans 5:17 says “because of one man’s trespass, death reigned through one man.”

Ecclesiasticus 22:3 It is a disgrace to be the father of an undisciplined, and the birth of a daughter is a loss.

That’s inconsistent  with the rest of scripture

Were it just for Jerome, as the Reformers argued, those 24, or what are for us, 39 books of the OT would be the books of the OT.  In fact all of the reformers just mimicked Jerome.  They included the apocryphal books but kept them separate and said “these are not canon”.  In other words, like Jerome “these books are edifying, but not useful to draw Christian doctrine from.”

But here’s the problem, the Septuagint had been so popularly established in the church that people didn’t like the idea of going back exclusively to the Hebrew books.  Augustine was one of those, he thought it could be divisive.  At that time you had an eastern church who still spoke primarily Greek and a western church who spoke primarily Latin.  The Greek speakers relied on their old Septuagint Old Testament and the Romans the latin translation of that.

Not to mention that Jerome’s translation update meant some words would be different.  For instance, in Jonah, when the Lord grew a plant up over Jonah to shade him from the sun, the latin translation of the Greek said it was a gourd, kind of like a cucumber plant.  When Jerome went to the Hebrew he found that it should actually be translated “an ivy” plant.  An actual riot broke out at a church in North Africa when the preacher used Jerome’s translation and said “ivy” instead of “gourd”.

People love their Bibles.  Don’t mess with people’s bibles.  We believe now that the word qiqayon is probably more likely a castor oil plant.. not an ivy or a gourd.

For the most part they had the same bible though.  But when Jerome insisted on using the original Hebrew texts that meant the eastern church either would have to get a new translation- an update to the Septuagint or they continue using their translation and have a slightly different bible than the west.  Augustine thought that would be a problem and so he insisted on keeping some of the latin translations that were from the Greek to minimize the differences.

So the church ended up with a sort of mashup of a good Hebrew to Latin translation of the Old Testament but because of tradition, the continued use of some of the apocryphal books that were a hold out from earlier.

And that would get solidified under Augustine who chose to ignore Jerome’s advice.  In 393, in Hippo in North Africa, where Augustine was Bishop, a council was held that determined the Apocryphal books to be inspired--- that is equal with the other OT books.  This was affirmed in 397 in Carthage.  And then in 405 by Pope Innocent I.  And then in 419 at another council in Carthage.  And then from there all the way until the reformation, the church in the west would affirm the apocryphal books as Canon.  But it actually wasn’t until that Council at Trent that the church declared these are Canon.  Affirming is different than declaring.

But the Westminster Confession, and shortly thereafter, the London Baptist Confession excluded the apocrypha even from the helpful category.

Given that our tradition comes from the reformers, particularly through Westminster and London, our Bibles do not have the apocryphal books in them.  And so the very first English bible printed in America DID NOT have the apocrypha.

However, that wasn’t the first bible printed in America.  The first one was in German, 1743, and it DID have the apocrypha.

Next week we’ll jump to the time before Jerome.  Since Jerome is drawing his conclusions based on what Jews believed to be Canon and since Jesus and all of the apostles were Jews and since our understanding of the OT canon ultimately comes from them, we’re going to try and get to the first century next week. 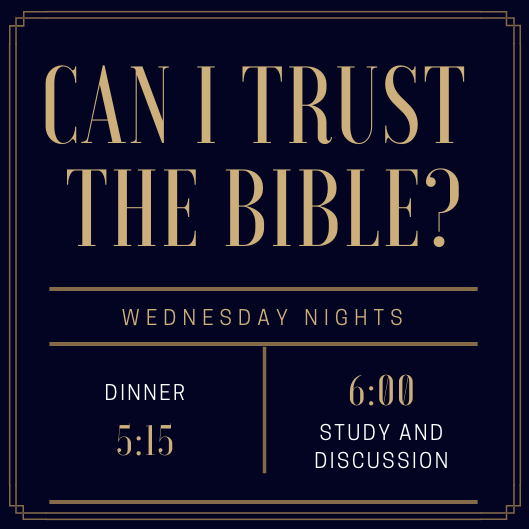 More in Can I Trust the Bible?

How Does Bible Translation Work?